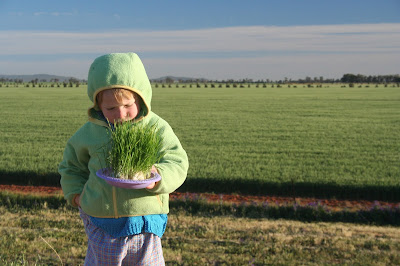 Florence was excited. The class at her small school in the country was going on holiday. Soon she’d be home amongst the wheat paddocks on her parents’ farm for two whole weeks.

And she was looking forward to visitors – holidays are always good for visitors.

Denzel was excited too. The term at his school in the city was almost over. Soon he would be leaving his classmates behind, and heading off with his family on a big two week holiday.

They were going almost halfway across Australia, and stopping at lots of interesting places along the way.

Denzel had another reason to be excited too. Because when school finished he finally got to bring home his special surprise, something he and all his classmates had been doing together for the last few weeks. Here’s what it was:


Denzel had been growing wheat from seed, and now the wheat on his paper plate was taller than his hand.

When he took it home to show his family, they were very impressed. Denzel was very proud. He wished he could keep the wheat forever, and watch it grow and grow.

Soon it was time for the family to pile into the car and head west. The holiday had begun. Denzel couldn’t bring himself to leave his plate of wheat behind. Instead, he found a place for it in the car.

As part of their holiday plan, Denzel’s family would visit Florence’s family and stop overnight on their farm. Once they arrived, Florence and Denzel had all of the rest of that day, and all of the next day until Denzel left, to do things together.

Florence had so much to show Denzel because he had never been to a farm before. She showed him the chookyard, and where the hens laid the eggs. They fed the chickens together, and collected the eggs. He’d never seen the inside of a chookyard before, or collected eggs (he only broke a few). Florence even introduced him to her special chicken friend.

Denzel had never seen such a big veggie patch. He and Florence picked carrots together, and peas, and tomatoes. Florence’s mum helped wash them, and wrap them up, for Denzel and his family to take along on their trip.

And he’d never thrown rocks into a dam before either, as the shadows grew long in the late afternoon, and the temperature started to drop.

That night, Denzel and his family slept in a tent under a clear sky filled with stars – another first for the big city boy.

The next morning, Denzel led Florence out to his family car. Now it was his turn to show Florence something. There on the floor in the back was … his plate of wheat! The wheat he’d grown at school, the wheat he was so proud of. The wheat he’d brought all the way to the farm.

The kids looked at the plate, and the wheat growing there. Then they looked at the wheat paddocks around the house. The paddocks went on for kilometers in every direction. The tops of the wheat crop stood nearly chest high on the kids, and swooshed and swayed in the soft, cool, early morning breeze. Deep and strong, like water in an ocean.

Then they looked back at Denzel’s plate of wheat. He held it up so the wind could blow through his wheat as well. It looked strong too, small and strong.

Denzel looked back and forth, at the paddock, at the plate. Then he looked at Florence. And he asked:

“Would you like to look after my wheat Florence?”

“Can you grow it as big and strong as your wheat?” Denzel asked.

“We can try, and … see what happens!” said Florence, with a big smile.

“You’ll be great at looking after it, I can tell,” said Denzel, and he looked again at the wheat paddocks, as if his little plate of wheat was already there, growing thick and strong in the sunshine.

“Want to help me feed the horses?” asked Florence, and the two kids raced away, towards the horse paddock, leaving Denzel’s wheat behind, forgotten for the moment.

But not forgotten completely.

Before long, it was time to go. Denzel and his family piled into the car, and headed off, back to the highway and the rest of their holiday.

After they’d gone, Florence and her parents looked at Denzel’s little plate of wheat, and decided that the sooner they released it from the little plate into a wheat field with all the other wheat, the better.

The paddock behind the house took up four square kilometers, but it only had four corners, and they walked to the one little corner closest to the house. While Florence’s dad went off to do some other work, she and her mum transplanted the wheat, from the cotton wool, to the dark moist soil of the wheat paddock.

Florence had the best time on the farm that holiday. There were visits to town, to relatives, to the river. There were more visitors to the farm, and toy boat races on the dam. There were long horse rides, and long days helping out.

Every day of the holidays, Florence made checking on Denzel’s wheat one of her chores, just like collecting the eggs. Every day she walked to the corner of the paddock to check it was still alright.

Denzel had a great holiday too, visiting lots of interesting new places, staying with relatives, making new friends. But he kept thinking about Florence, and his little plate of wheat.

Soon though, the kids were back in class with their mates, learning new things, and looking forward to the long summer break.

Denzel and Florence both remembered the little plate of wheat sometimes, the one they’d transplanted from Denzel’s classroom to its own little corner in Florence’s paddock. But then their thoughts turned to other things.

Meanwhile, as summer approached, the wheat grew to full size, and slowly turned from green to brown. The wind, when it blew across the wheat now, made a rustling sound.

Soon, it was ready to be harvested, and Florence’s dad was getting the big machines ready to do the job, hiring farmhands, making arrangements to sell the crop.

One night at dinner, Florence said “I wonder what happened to Denzel’s wheat?” The very next day after school, she and her mum headed out to take a look.

“Oh,” said Florence, because all the wheat looked the same. It had all grown tall and turned brown.

“Which is Denzel’s wheat?” her mum asked.

Florence looked and looked. It all looked the same! But then she knew.

“It’s here mum, this is Denzel’s corner, here. Look, his wheat has grown up with ours!”

“Mum,” she said, “We should keep it for him, for when he comes to visit again, to show him.”

But Florence’s mum had another plan, and Florence agreed it was the best plan, and so they did it.

One morning soon after, Denzel’s teacher was very happy to tell her class she had a special surprise for them.

She explained that a big package had arrived at the school, addressed to ‘Denzel’s Class’, and she brought it out for them to open.

Inside they found three things: a large bundled sheaf of wheat, a big bag of wheat seeds, and a letter. Here’s what the letter said:


Hello from the farm! How are you all? We hope you’re enjoying school.


We’re writing to you because we had a visit last holidays from Denzel in your class. He told us that you’d been learning about the life-cycle of plants, and growing your own wheat. He even brought his wheat with him to show us.


We had some wheat to show him too. That’s because we live on a wheat farm. And when Denzel left, he left his wheat with us, and we planted it, in a special corner of the paddock.


Our wheat’s grown now, and been harvested. And in this package is a sheaf of wheat, from Denzel’s corner of the wheat field, and also a big bag of wheat seeds, so you can see what it looks like before it’s turned into flour.


Hope you have as much fun with it as we had sending it.


Florence (and her mum)

Denzel’s class had a great time with their wheat sheaf and bag of wheat. They looked at the photos from earlier in the year, photos of themselves with their small plates of wheat, and they compared it with the big sheaf. They looked at the seeds of wheat, still on the stalk, and at the big bag of seeds Florence had sent them. They found a special pride of place in the classroom to keep the wheat sheaf and the photos.

The next day, Denzel’s teacher took the whole class on an excursion to the local shops, so they could watch the grocer at the food co-op turn most of their wheat seed into flour. He put the seeds into the top of a machine, which ground them up, and milled them into a fine flour, which came out the bottom to be gathered up in a bag. Flour just like the flour you use to make a cake.

And that’s exactly what the class did. They took their fresh flour back to school and mixed and baked a cake, big enough that everyone had a piece. Here’s the recipe they used:

And there were still enough wheat seeds left that the teacher said she would use them for next year’s class, when it was their turn to learn about the life-cycle of plants, and grow wheat in a plate.

A few days later, Florence got a thank you letter. Denzel put his name there with all the other kids. There was a photo of the class too, eating their cake, and of a special piece of cake on a plate for Florence, even though she couldn’t be there in person.

After they read the letter and looked at the photos, Florence and her parents walked out from the house, and down along the track to the corner of the wheat paddock where they’d transplanted Denzel’s little plate of wheat all those months ago.

Florence looked at the wheat stubble on the earth there.

“Looks just like the rest of the paddock,” she said.

Every crop after that, every year, Florence would ask her dad, “How’s the wheat going at Denzel’s Corner, dad?”

And he’d tell her that maybe she’d better go and take a look.

So she would. And afterwards, she’d come back and have a look in her box of special things too, at the photo of all the smiling kids, far away in the city, eating cake made with wheat from Denzel’s Corner.


The preceding material is a children’s story (I hope you got that!), intended for four to seven year olds. It remains unpublished, so I welcome your editorial suggestions, your offers to produce artwork, feedback from your testing of the story on your own children or class of children.
The material remains my private property, and apart from the exceptions described above, no unauthorized reproduction is permitted.
Any interest, comments, suggestions, doubts or concerns, email me at
ric.curnow@anti-bias.com
Ric Curnow, February 2016


Posted by Aunt Escolástica at 7:27 PM